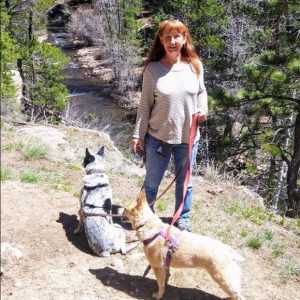 Originally from Illinois, Robin’s family camped somewhere in the Rocky Mountains each summer. She moved to Denver in 1995 to live with a beloved friend. She is still very close to her family, especially her Mom who she talks to every day. Robin grew up around many types of animals via extended family and Girl Scout camp. In 2010, she became a Certified Dog Trainer and she started volunteering at the Denver Animal Shelter. In 2012, she and her husband moved to Adams County, where she started volunteering at the Adams County Animal Shelter, now called Riverdale Animal Shelter. Robin just graduated with an Associates of Applied Science in Veterinary Technology and will be taking the national exam to become a certified Vet Tech this summer.

In her personal life, Robin is also very active in volunteering in her community. She grew up picking up aluminum cans with her grandmother. She started cleaning up larger areas in the 1990s. Now she carries a bucket and pickers on her daily walks with her adopted dog Pearl and now Leeloo, a failed foster. She and her husband became official volunteers of Adams County Parks and Open spaces when they adopted Little Dry Creek Lake Park. Brian and Robin grow an ever expanding vegetable garden every summer. Robin organizes neighborhood cleanups and is active in her community helping to organize Commissioner and Sheriff’s meetings. In addition to animals, Robin enjoys hiking, fishing, bird/wildlife watching, and anything to do with water and being outdoors.